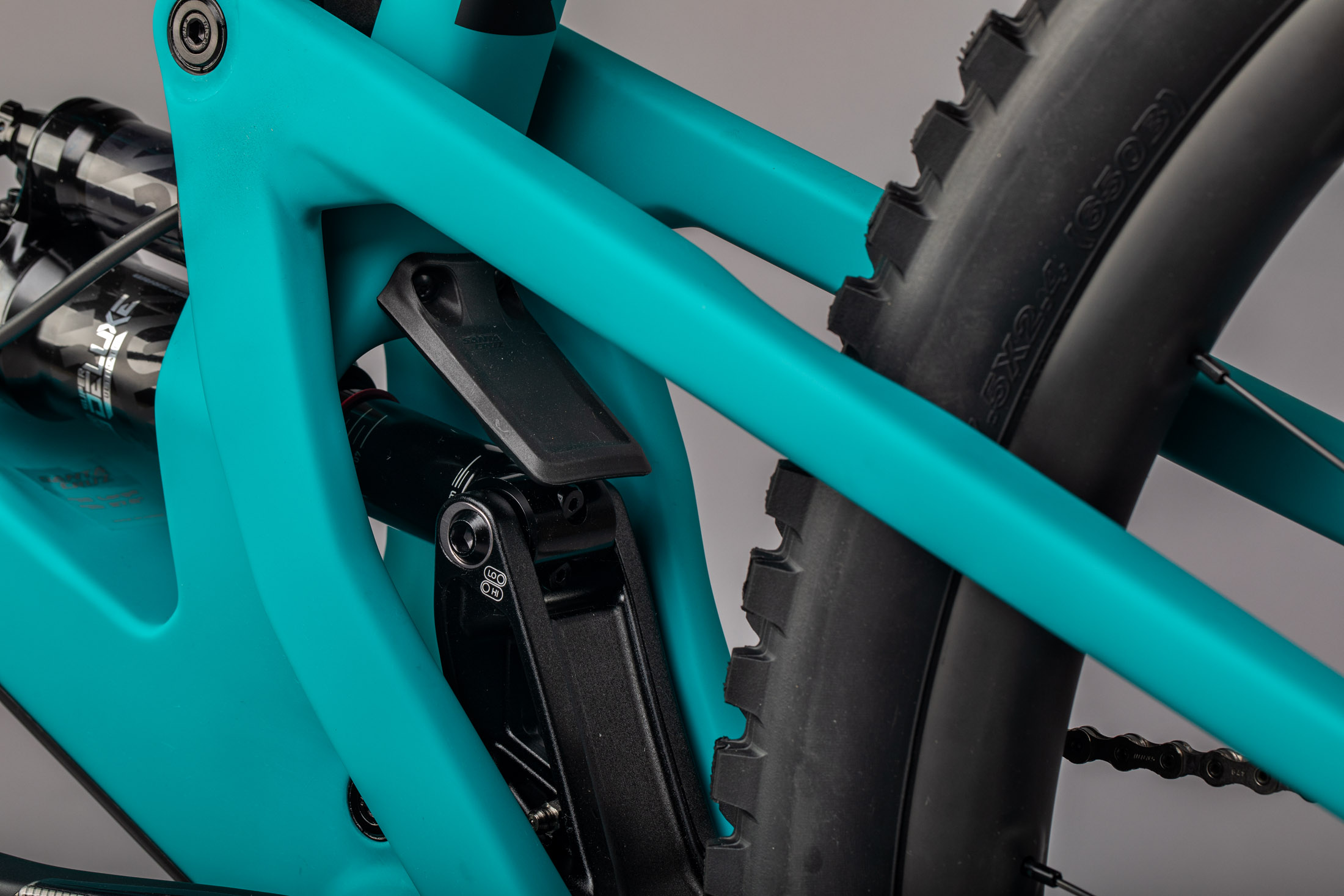 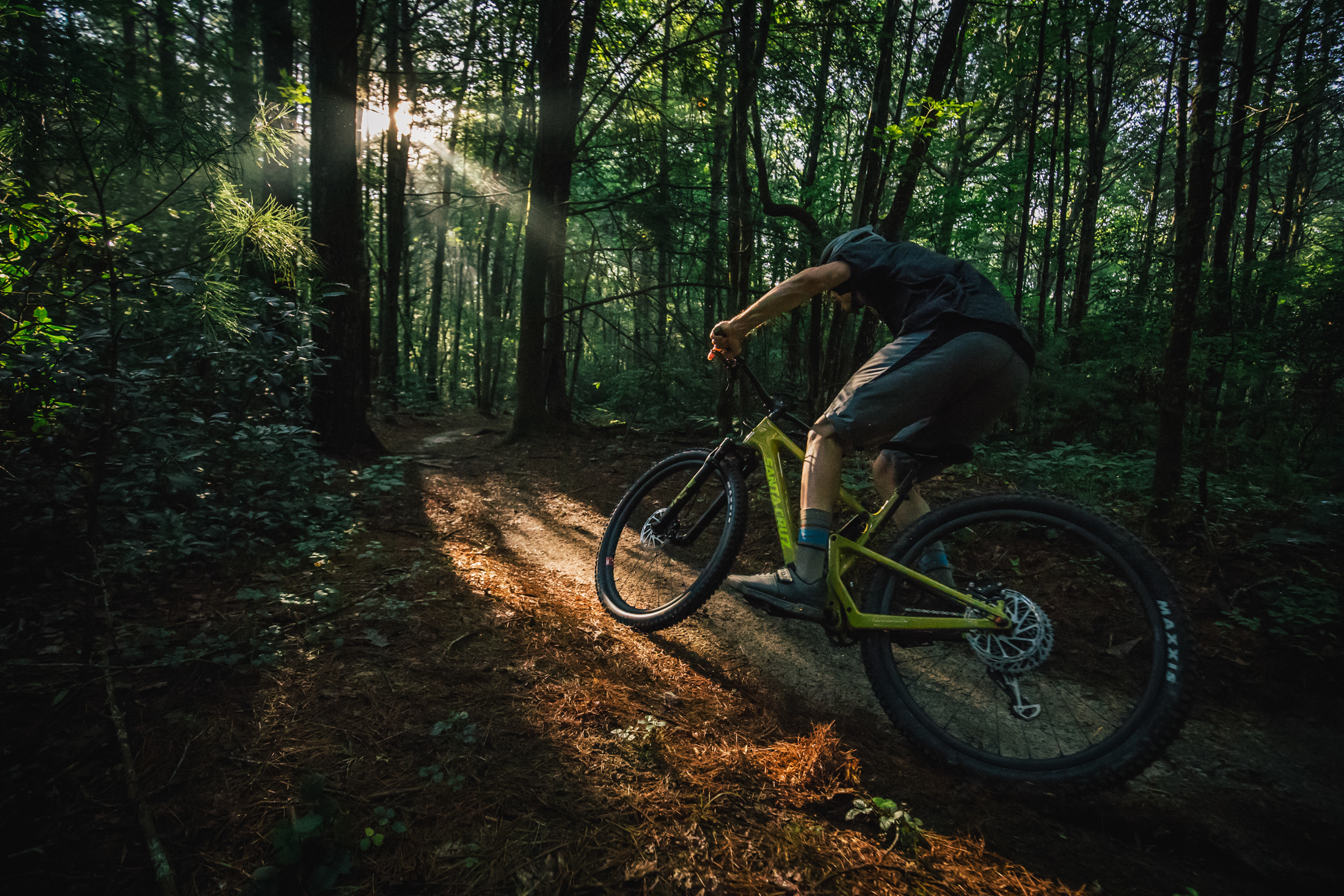 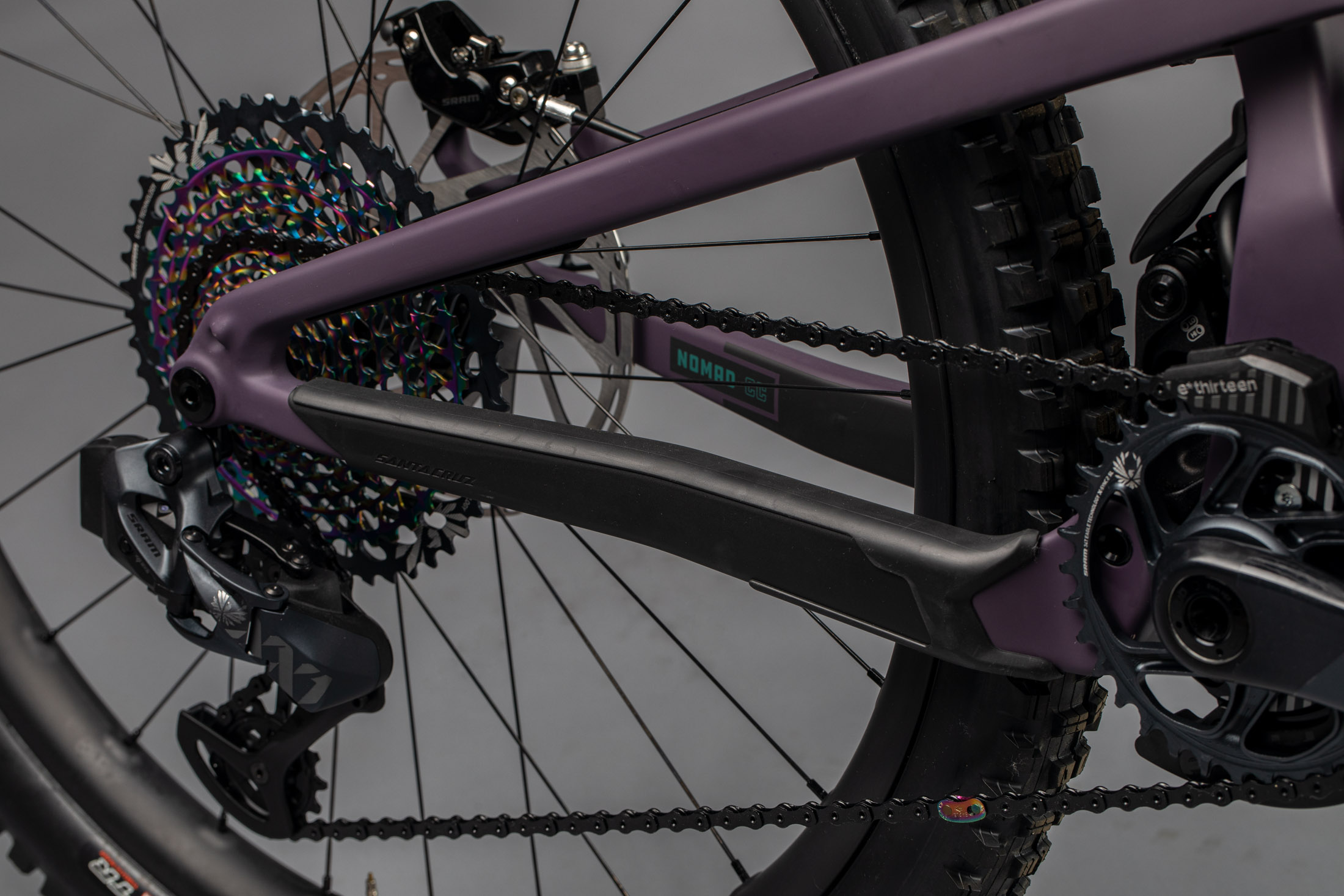 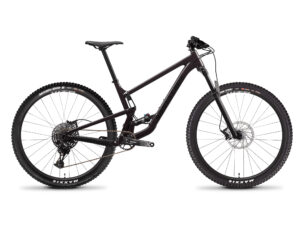 Santa Cruz was new to us for 2019! Having been steadliy building a reputation for full suspension bikes, trail orientated and of course our custom builds, we see SC as a perfect fit for our ethos and our customers!

Santa Cruz have been building bikes since 1994 (read more about them here!) and right from the start they weren’t ones to follow the trends, but rather go there own way and do it how they wanted to. Currently you’re seeing bikes in the range which are class leading in performance, lighter than a lot of those around them and all backed up with a lifetime warranty.

We’re really excited to now be working with SC. We feel they’ve got bikes in just the right range for our terrain, riding style and need for high quality.

As we’re a small store, with lots to do… we’d prefer if you came in to visit us and take a test ride on a bike and discuss what might be the right bike for you. There are hundreds of options and details we can go through, so it’s ideal to be instore so we don’t just get lost in a digital conversation!  However, we know that’s not always possible – so feel free to mail, message us on FB or of course give us a call!

A bit of info to understand the range better. There are a LOT of options! Once you’ve got your head around it all, it’s quite easy, but the first time you might be a bit lost! Here’s some useful info to begin with! 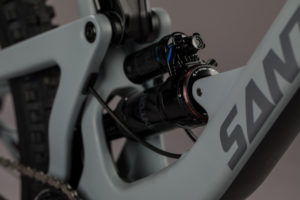 FRAMESETS.  Not all available in all options, but choose from Alloy (AL), Carbon (C) or Carbon (CC) The CC version is the high end frameset. It uses different materials  and is about 0,5kg lighter than the C model. Read more…

All models have the same lifetime warranty, including free of charge pivot bearing replacement.

You can find frame/complete bike weights on the SC website under each individual specification. We’ve weighed the bikes we’ve had instore and they’re pretty accurate! Alloy –> C= -500g. C –> CC= -500g (circa!) 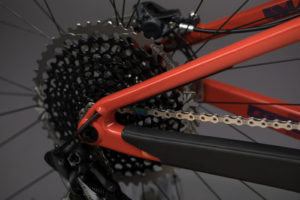 The new blur has had a makeover. It is the lightest Blur Santa Cruz have ever made. It makes use of flex stays on the rear to save weight but also work with the suspension to give a great ride.

This is the XC race bike in the lineup. With the various frame and build options available this can be built up into a very light race bike.  It also comes as a trail version which has a 110mm rear travel and a 120mm fork for those of you wanting just a little bit more travel up front. If putting in long distance is your goal this is the version for you. 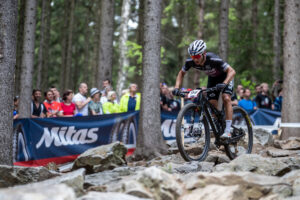 The Tallboy continues to be on of those bikes that suprises. It can put in the long distance rides but make full use of the lower link VPP suspension on terrain you would not expect it to be able to cope with. This  bike is touted as the downhillers xc bike as it is so capable. We think this bike is ideal for local riding in Uppsala if you want to tackle some tricky terrain as well as getting in a long ride.

BikeMag.com – ”Once the climb was over—which tended to happen pretty quickly—the Tallboy reframed our notion of what a 120-millimeter bike can handle. The slack head angle and generous reach play a central role, lending the bike an aggressive feel and signaling to its pilot that, as long as you hold on, it’ll make it through.”  Click here for the full review. 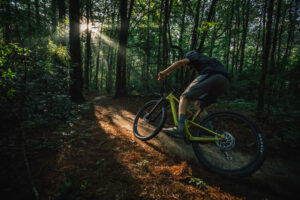 The Hightower is Santa Cruz’s ”best of” bike. It is there do it all trail bike that can do bits of everything and do them well. More capable that the Tallboy but still able to get the kilometres in, albeit a little bit slower than it’s shorter travel siblings.

MBR Magazine –  10/10 ”The new Hightower is alert, rewarding, inspiring and refined – all the things that you’d hope for at this price – and it’s almost impossible to find a chink in its armour, whatever kind of terrain you put in front of it”  Click here for the full review 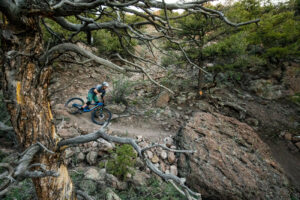 The Megatower is the most capable and confidence inspiring 29er trail bike in the Santa Cruz line-up. If going fast down gnarly terrain and destroying everything in its path is what you do then this bike is for you.  A full on enduro race machine that can tackle anything the trail has to offer and can play in the bike park as well. Coil shock options are available. 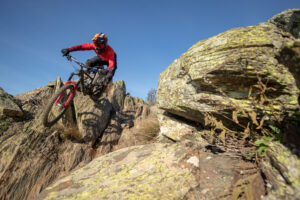 Bikemag.com – ”We liked it, a lot. It’s one of those bikes that’s happier the faster it goes—duh—but even though it’s long, and damn it was long with a wheelbase of 1,260 millimeters for the XL (or 1,270 with the chainstay flip chip in long), it still has an energetic feel to it at lower, normal-esque speeds.”  click here for the full review

The 5010 has size specific chainstays and along with 27.5 wheels this bike is aimed at those riders who want to treat every trail as a playground. It is light and nimble and so much fun. But it can still deal with the terrain that is thrown at it due to the VPP suspension.

If this interests you talk to Velotek owner Neil as this is his personal weapon of choice.

Bikeperfect.com – ”However, if you’re the kind of rider who hunts for every turn to hook, loamy corner to explode sideways out of or slight lip to hip then the 5010 is an absolute riot. The fact it’s more stable and sucks up way more trouble fires you along the trail with more flow than before. It hasn’t lost its killer kick and precision agility meaning you’ve got even more speed to play with, too.”  Click here for the full review 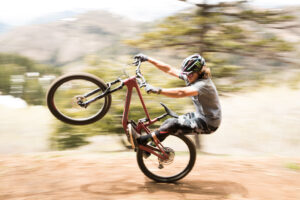 The new Bronson gets the mullet treatment.  It is still the bike that can be riding tech gnar one minute, to jumps and flow the next. The 29er wheel out front provides great rolling capability and stability whilst the 27.5 rear allows for more manouverability and playfullness.  A very capable bike that would not be out of place in an ESS race. 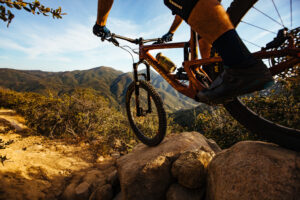 How far can you push a single crown bike? The Nomad has been built around the concepts of the V10 downhill bike whilst still keeping it a trail bike so it can pedal to the most gnarly spots. The 170mm travel will then make the downhills fast and dependable. This is one hell of a bike for the aggressive bike rider out there. 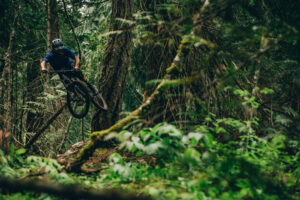 Enduro-MTB.com – ”The Santa Cruz Nomad is a ripper. The rear suspension offers outstanding performance and remains composed in the roughest terrain. It feels very poppy too and provides a lot of mid-stroke support for an active riding style. However, if you don’t actively adjust and shift your weight, you will quickly become a passenger – experienced riders only!”  click here for the full review

Why buy from us?…

Good question! Aside from the friendly welcome and expert advice, we pride ourselves on our service, backup and workshop facilities and this is something we try to bring to all our bike sales. We offer the typical first service (after a month) but before that we start with the building of your bike – we take more time to make sure it’s assembled correctly, and not just OK, but as well as it can be. Race ready if you like. We don’t just turn the bars and fit the pedals (which would suffice for some) we go that much further and remove the fork for example. This means we can make sure the headset bearings are greased with a good quality lubricant (something which even the premium brands seem to forget in the factory) We make sure that bolts that need to be torqued to a specific torque are taken care of, seatposts are greased (or carbon pasted!) we take time and set up the brake calipers perfectly and that all the set up and adjustments are ’just so’. What this means for you, is that when you collect your new machine, you can be sure it’s not only ready to ride, but also as good as it can be and that you have had the same mechanics, working to the same standard on your bike as those pro athletes that choose to use our services (read more about them here!)

However, that’s not all! With every Santa Cruz we also follow up that initial setup with 2 further services. We’ll remind you (via SMS) after 6 months that it might now be a good idea to call back with the bike and let us do it’s first ’real’ service. Hopefully you’ve been riding the bike and it’s a good time to go through it with our 30 point ’Dr Bike Check’. We do this 6 month service to set you off in the right direction of servicing your bike at least twice a year! The third service comes after 12 months and this covers all the details of the 6 month with the additional benefit of both the fork and damper service (and this includes the parts!) We feel this takes care of your first year of riding and makes sure you have the best support possible with your new SC!

But we don’t stop there!… Also included with your new bike is our goody bag! SiS energyfood, tubeless sealant, tubeless valves, spare gear hanger, custom fender, Peatys link lube and our own coffee blend from Uppsalas own roasters… Uppsala Kafferosteri!!

All in, our service package is worth 3540kr and comes FREE, with all Santa Cruz bikes and custom builds (although we reserve the right to change this package to a simplified version with just a first service, if there are special circumstances with pricing for example – a bike in a sale, an ex demo bike or anything else. Try as we might, we can’t do everything for nothing! 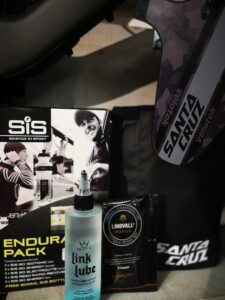 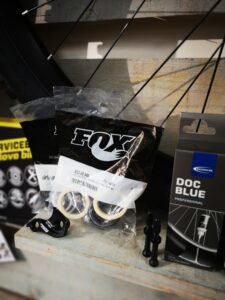 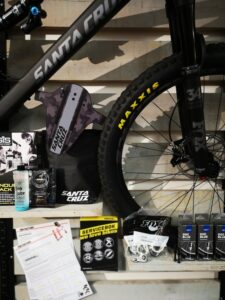 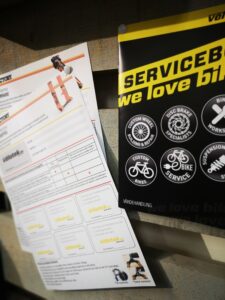